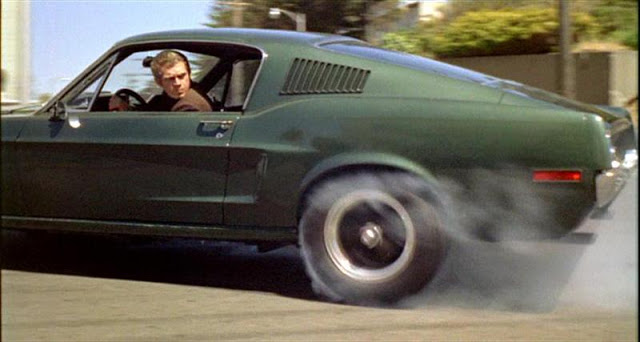 Car scenes can be some of the most telling of a film: in the close confines of an automobile you can see characters crumble, strengthen, exhibit their personalities in all their glory or see them begin to closely re-evaluate their lives and choices. This little space allows unparalleled freedom of expression, and it is little wonder that, time and again, directors explore their characters in car sequences or even whole road movies that see a car journey extend over the whole course of a feature length film. As well as providing an insight into character subjectivity, cars aesthetically make a big statement, with the type of car used often perfectly reflecting the personality and style of the people who inhabit them. At Mary Jane Fashion, we’ve looked at some of our favourite car sequences, the people who take part in them and what they bring to the overall film.
Thelma and Louise
Bursting onto our screens in 1991 was the story of Thelma and Louise, coined by acclaimed screenwriter Callie Khouri and directed by Ridley Scott. This film sees the eponymous best friends go on the run, challenging stereotypical gendered assumptions about women and reclaiming their lives in the only way they can. The convertible green T-bird they drive is a classic American car that sees the pair transition from conforming women to full-on rebels: along the road, they ditch the feminine dresses, the lipstick and their perfectly coiffed hairstyles for ensembles that are comfortable, powerful and strong. Denim, biker tops and cowboy hats are their outfits for blowing up lorries and conducting day-light robberies. This car journey is not a simple voyage of self-discovery; over the course of the film Thelma, in particular, wakes up to the sexist double standards they are compelled to live by thanks to the patriarchal forces at play and both begin the actively reject them, the key, affirming line being ‘something’s crossed over in me, and I can’t go back’. The car is the key part of this epiphany for both and remains , throughout the film, an important dramatic companion to the characters. 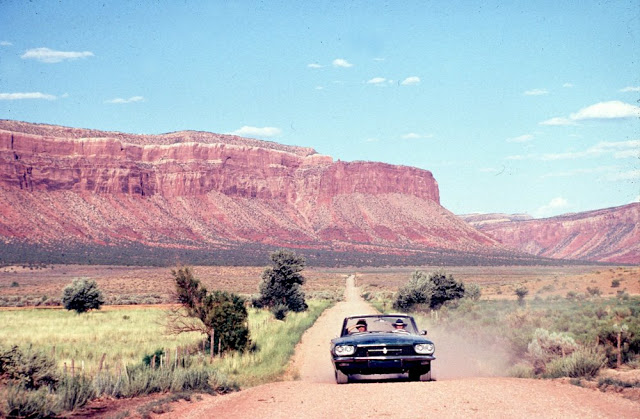 Bridget Jones
From the deeply meaningful to the deeply hilarious, the car scene in the first Bridget Jones film is a minimal moment but proves very funny and very insightful into Bridget’s experiences in love and life. Upon embarking on a mini break with paramour Daniel Cleaver, Bridget begins the car journey, in Cleaver’s vintage Mercedes Benz 280 SE convertible, feeling like Grace Kelly, complete with cat-eye sunglasses and a shawl wrapped around her head. However, as in many areas of her life, Bridget doesn’t anticipate the disastrous; her head scarf flaps off leaving her with a head of hair not too dissimilar to a bush. What I love about Bridget is that she is an everywoman who speaks to many us with her constant stream of mishaps, accidents and embarrassing moments. This car scene is just a small scene but shows directly how important it is to manage your expectations. We all wish and imagine ourselves to be in desperately romantic, glamorous situations, in an old fancy car with a fancy gentleman friend, but often we may not have realised we may be sharing these exact experiences with the wrong people.

Cher, Clueless
The queen bee of nineties teen films, Cher is the intelligent and style-savvy high school student who organizes the lives and loves of the friends and acquaintances around her. Held only to account by old family friend Josh, Cher sets out to use her popularity for good causes AKA matchmaking and getting higher grades. Early on in the film, Cher introduces us, with her stream of consciousness voiceover, to the ‘loqued-out Jeep’ her dad has bought her. The white Jeep Wrangler is a convertible car with a boom box sound system which she uses to ‘practice on’. The Jeep is undeniably a sign of Cher’s social status and privilege, highlighting the wealth her father has to spend on such a luxurious first car (that she’s not even legally allowed to drive yet). All this may make Cher sound like a selfish entitled brat, but she is a genuinely good natured person who just hasn’t had time to work out what she wants and who she is. Indeed, the car sees this come to a head, when she dramatically fails her driving test whilst trying to confront her emotions and feelings towards her friends. Her failure in the car marks an important moment where she realises that privilege and popularity won’t get her where she wants to be in life and she entirely makes over her perspective as a result. 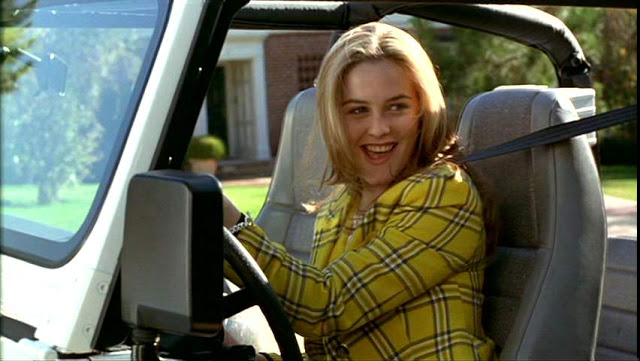